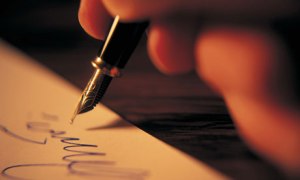 “We hold these truths to be self-evident…”  So began a declaration, penned by Thomas Jefferson, signed by fifty-six of our forefathers two hundred and thirty-eight years ago, that instigated the Revolutionary War and conceived a grand experiment in democracy; one nation under God, the United States of America.

According to the Declaration of Independence, this country was founded upon truths readily evident to all who would see them.  But these truths would prove costly to defend and uphold.  Accordingly, the signers of the Declaration of Independence acknowledged their support “with a firm reliance on the protection of divine Providence, we mutually pledge to each other our Lives, our Fortunes and our Sacred Honor.”

Tradition tells us that of the fifty-six men who signed the Declaration of Independence, five were captured by the British, tried as traitors and tortured before they died.  Nine fought in the Revolutionary War and died from the wounds or hardships they incurred.  Twelve had their homes ransacked and burned.  Two lost their sons who died serving in the Revolutionary Army.  Another two had their sons captured by the British.  Freedom wasn’t free.

One hundred and fifty-one years ago, our 16th president, with our nation embroiled in the midst of the Civil War read from the words he had penned, “Four score and seven years ago our fathers brought forth on this continent, a new nation, conceived in Liberty and dedicated to the proposition that all men are created equal.”  Lincoln’s Gettysburg Address reminded us once again that truth and liberty are precious enough to preserve and protect at great cost.

Lincoln’s speech aptly charged our nation to ensure, “these dead shall not have died in vain.”  But, “that this nation under God, shall have a new birth of freedom, and that government of the people, by the people, for the people, shall not perish from the earth.” Freedom still wasn’t free.

One hundred and fifty-one years later our nation continues to be reminded on a regular basis that truth and liberty are tenuous to hold on to, and costly to preserve.  While we have fought many enemies since our nation’s conception, foreign and domestic, I can’t help but wonder if our greatest present risk is domestic.

It is self-evident that a democracy is only as good as the people who empower it.  If the majority of the people who constitute our nation have little or no commitment to the once self-evident truths, the marginalized unalienable rights we were founded upon, we are very well on a slippery slope headed to self-destruction.  Freedom still isn’t free.

We may need another Thomas Jefferson, or Abraham Lincoln, to powerfully articulate to our present generation an urgent call to return to our roots; the truths that our Creator has endowed us with, and that our forefathers so passionately wrote about.  While positive change won’t come easily, thankfully, the pen still has the potential to be mightier than the sword.